Can Lack Of Sleep Affect Your Social Life?

We humans are a social species. And sleep deprivation can affect our social life. Notably, researchers found that brain scans of sleep-deprived people as they viewed video clips of strangers walking toward them showed powerful social repulsion activity in the neural networks that are typically activated when humans feel that their personal space is being invaded. Sleep loss also blunted activity in brain regions that normally encourage social engagement.

The less sleep you get, the less you want to socially interact. In turn, other people perceive you as more socially repulsive, further increasing the grave social-isolation impact of sleep loss. That vicious cycle may be a significant contributing factor to the public health crisis that is loneliness.

What Does Sleep Do to Your Body? 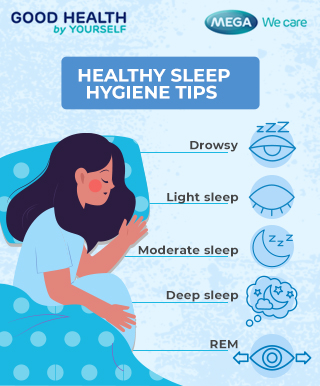 Many people think of sleep as a time when you 'recharge your batteries'. Just as you can continue using your smart phone or laptop even if it's not fully charged, they believe that you can function just fine through the day even if you haven't had full eight hours of sleep the night before.

But this 'battery' metaphor completely misses the true nature of sleep. Instead of being a time when you lie passively in the dark as your body replenishes its energy, sleep is in fact a highly dynamic process. You may be unconscious, but your brain is very busy during those hours — sorting through memories and tidying up the clutter of the previous day's experiences. Instead of just recharging your battery, you're actually engaging in mental maintenance. Sleep is a very structured process though. As you go through the night, your brain cycles through four stages of sleep. These include the light sleep stages of 1 and 2, as well as the deep sleep of stage 3. But most important of all is rapid eye movement (REM) sleep — the stage when you dream. Most people need about two hours of REM sleep per night to feel fully rested and cognitively alert the next day, no matter how many total hours of shuteye they get. This is why people differ in how much total sleep they need.

In fact, just factoring in the time between going to bed and getting up isn't a good measure of how much sleep you actually got, or a good indicator of the quality of that sleep. Some people take longer to fall asleep than others, and all of us wake up several times during the night, whether to go to the bathroom or just to shift position, even though we may not remember these waking episodes the next morning.

In the laboratory, researchers can measure a person's sleep efficiency — that is, the amount of actual sleep obtained during a period of time. However, your own subjective perception of how well you slept is a pretty good indicator of your sleep quality, regardless of how many hours you were in bed.

All of the above-mentioned three studies more or less show similar results related to sleep and anger/aggression. Prolonged sleep deprivation has been connected to changes in the brain such as reduced receptor sensitivity and changes in functional communication between brain regions.

negatively to bad situations. It is because lack of sleep enhances amygdala activity (the part of the brain that triggers negative feelings like anger).

It explains why sleep affects our social life.

Lack of sleep affects our social life as it also affects our ability to process emotional information. When sleep deprived, you might often gauge the feelings of other people inaccurately. Someone who lacks sleep is less attuned to how other individuals feel and is more likely to miss social cues. Sleeplessness might also impair your ability to empathize with other people's situations.

In fact, sleep-deprived people tend to be less facially expressive. Note that emotional experiences correspond to the expressions exhibited. As such, their failure to show any expression demonstrates the extent of the effects of lack of sleep.

In a work setting, lack of these crucial abilities affects teamwork, trust, and cooperation. Additionally, these sleep-driven inabilities on emotional sensitivity and empathy lead to conflict even in your relationships.

Effects on Teamwork and Performance

Teams with members who are sleep-deprived are likely to experience problems making decisions and solving problems. In an organization, for example, loss of sleep causes impaired work performance and altered behavior. In fact, it does not require a lot of sleep deprivation for someone to act out in such a manner.

Sleep has a big impact on our social relationships, especially our most intimate ones. When one partner has slept poorly the night before, there's more conflict in the relationship the next day. This is because we have less empathy when we're sleep deprived, and we're less likely to engage in effective conflict resolution.

What's more, even the well-rested partner will show a decrease in empathy when dealing with a sleepless spouse, as if sleep deprivation were contagious. Further, couples report having more difficulty sleeping when they've experienced conflict with their spouse, especially late in the day. Thus, couples can easily fall into a vicious cycle of relationship conflict and poor sleep.

To effectively interact with others, you need to accurately read their emotional facial expressions; people who are sleep deprived have a lot of difficulty doing this. After a sleepless night, research participants were less accurate at judging the emotions of happiness or anger in pictures of strangers, compared with their performance on this task after a good night's rest. In addition, you are more likely to engage in stereotypic and biased thinking when you haven't had enough sleep. The ability to read the emotions of unfamiliar people and to inhibit prejudiced thinking is essential to smooth functioning in most workplace environments, so not getting enough sleep can impact your job performance as well.

Negative experiences, such as conflict with a spouse or family member, being discriminated against, or feeling rejected, can make a good night's sleep hard to get. Although stressful social situations are inevitable, your ability to cope with these experiences depends on how well rested we are. Emotion regulation is a process in which we reevaluate our feelings and try to put them in proper perspective. But it requires intense effort, which may simply be out of reach if we haven't been sleeping well. Once again, we see the vicious cycle of sleep deprivation and social conflict.

Effects of Lack of Sleep on the Body

Sleep deprivation can affect various aspects of health, including: 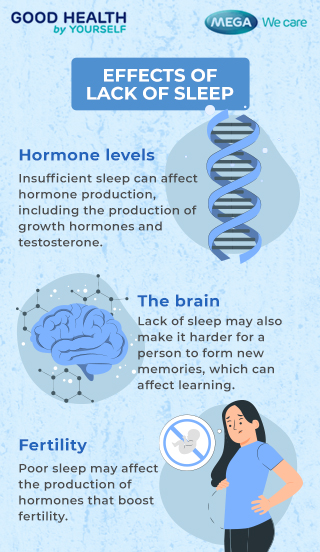 How much sleep do you need

Most healthy adults should aim to sleep 7 to 9 hours every night. Think you can get by with less? You might be fooling yourself.

A lot of professionals believe that they need just 6 hours or even lesser. The truth is, that's not very common. Often people who think that they need less sleep are just good at compensating for the effects of sleep deprivation - on a short-term basis. Chances are that their sleep deficit will catch up with them eventually.

You might be wondering if you can shortchange your sleep during the busy week and catch up on weekends. Many sleep specialists believe that you can never truly make up for chronic lost sleep.

While getting in some extra sleep can help you recuperate after an occasional sleepless night, it's not a wise strategy in the long term. Sleeping in or taking naps on days off can increase the odds of developing insomnia and can lead to problems with the natural circadian rhythms that drive your sleep patterns, Salas says.

Some suggestions for improved sleep include:

Alternative therapies for inducing quality sleep on a consistent basis include:

Days when we haven't had much sleep are always difficult to get through. It can affect how well we do things and our general mood - all you can seem to think about is getting back home to jump into bed for some precious sleep.

Lack of sleep has long been linked to a host of different mental and physical problems including depression, diabetes and impaired cognitive function but now, research has shown that it can also have another effect: social isolation.

While occasional sleep interruptions disappear quickly, consistent lack of sleep leads to drowsiness throughout the day, an unpleasant mindset towards life, as well as obesity.

Shama Nimkar is a Lifestyle Journalist, Content Writer and a Publishing House Copy editor, and has a degree in Arts & Lifestyle Journalism from the University of the Arts London. With several articles published across renowned platforms in India and in the UK, Shama is now based out of Canada, and is pursuing higher studies in Digital Marketing.

Exercise Mistakes To Avoid Before Sleep

Sleep Apnea and Hypertension: Are They Linked?

Pick The Best Essential Oils For A Good Night's Sleep