Worm Infections In Toddlers and How To Deal With Them

Why Childhood Immunizations Are Important

The Importance Of Sleep For Newborn

Glucose comes from the Greek word which means "sweet". It is a type of sugar one gets from the food one consumes, and the body uses it for energy. As it travels from the bloodstream to cells, it is called blood glucose or blood sugar.

Insulin is a hormone that moves glucose from the blood to cells for energy and storage.

What Are Normal Blood Sugar Levels

How Much Sugar in The Blood is Too Much?

There are two types of diabetes:

Without enough insulin, glucose can't move into the cells. As a result, the blood glucose levels stay high.

Relation Between Blood Sugar and Sleep 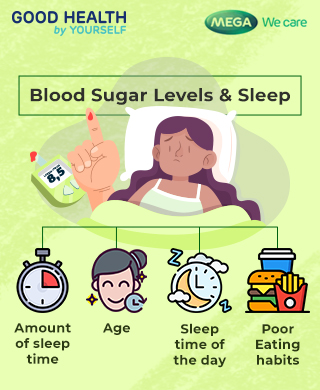 Getting really good, consistent sleep is one of the most important and kind of fundamental aspects of health. Unfortunately, a lot of people have issues with sleep.

One of the most common causes of waking up in the middle of the night is something called nocturnal hypoglycaemia. This is where blood sugar level drops low during the night and you end up waking up.

Some people just don't eat enough calories: for instance, having just coffee for breakfast or skipping lunch altogether. This when done over long periods can lead to a situation where there are not enough calories and not enough stored glycogen to be released throughout the night to keep blood sugar levels stable, leading to nocturnal hypoglycemia.

Both hypoglycemia (low blood sugar) and hyperglycemia (high blood sugar) can affect sleep in those with diabetes. Hypoglycemia may occur when you have not eaten for many hours, such as overnight, or if you take too much insulin or other medications.

Hyperglycemia occurs when the sugar level rises above normal. This may happen after eating too many calories, missing medication, or having an illness. Emotional stress can also cause your blood sugar to rise.

Does Sugar Affect Your Sleep

If there is a fluctuation in one's energy levels, and blood sugar levels keep going up and down, then it can potentially affect the hormone cortisol which results in waking up a lot at night.

Sleep habits play a key role in controlling blood sugar (or glucose), which increases the chances of getting diabetes.

How Does Lack of Sleep Raise Your Risk of Diabetes

Many studies have suggested that short sleepers (those who get less than 6 hours per night) have irregular eating habits, snack more, and are more likely to eat unhealthy food. Other research has found that short-changing sleep can directly affect how the body makes other hormones, which in turn affect blood sugar.

For example, when you stay up late, your body makes more of the hormone cortisol, which affects how insulin works. Also, growing evidence has shown that disrupting one's biological clock by being awake at night can make cells more resistant to insulin.

Decreased sleep is a risk factor for increased blood sugar levels. Even partial sleep deprivation over one night increases insulin resistance, which can in turn increase blood sugar levels. As a result, a lack of sleep has been associated with diabetes.

The following factors have been found to influence the relationship between sleep and blood sugar levels.

Low blood glucose levels and hypoglycemia can have a negative impact on sleep. If one is taking insulin or other blood sugar medication, one may be at risk of low blood sugar levels during the night.

Low blood sugar levels overnight can disrupt the sleep pattern and lead to difficulty waking in the morning and tiredness throughout the day. According to the National Institute of Diabetes and Digestive and Kidney Diseases, low blood sugar during sleep can cause the following symptoms

Researchers have found the following connections between sugar and lack of sleep or sleep problems:

High blood sugar during the night can lead to insomnia and next-day fatigue. As with many chronic conditions, feeling of depression or stress about the disease itself may also keep one awake at night.

When blood sugar levels are high, the kidneys overcompensate causing them to urinate more often. During the night, these frequent trips to the bathroom lead to disrupted sleep. High blood sugar may also cause headaches, increased thirst, and tiredness that can interfere with falling asleep. 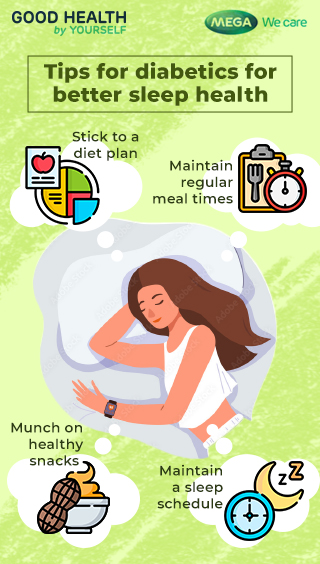 Sleep Apnea is a common breathing disorder that affects many people whilst they sleep. This could be an early warning that diabetes development is underway.

Numerous medical studies have linked obstructive sleep apnea with a greater risk of developing type 2 diabetes. According to experts, side effects directly related to sleep apnea could influence the metabolism of people as they sleep.

A potential treatment is continuous positive airway pressure (CPAP). With CPAP, patients wear a mask over their nose and/or mouth. An air blower forces air through the nose and/or mouth. The air pressure is adjusted so that it is just enough to prevent the upper airway tissues from collapsing during sleep. The pressure is constant and continuous. CPAP prevents airway closure while in use, but apnea episodes return when CPAP is stopped or is used improperly.

The correlation between lack of sleep and diabetes is well-proven, with interruptions to deep sleep a key part of diabetes risk.

How Are Sleep Problems Diagnosed

How Can People with Diabetes Cope with Sleep Issues

Careful management of blood sugar levels can help to improve sleep for people with type 2 diabetes. Good sleep hygiene habits are important. These include both daytime and night-time habits, such as:

Adhering to a diet plan that works for you helps keep blood sugar under control.

By now, you would have understood the intrinsic connection between sleep and diabetes.

Lack of sleep can affect blood sugar levels whereas blood glucose control can also affect sleep, which results in trouble sleeping. Low blood sugar levels also known as hypoglycemia can disrupt sleep pattern and lead to difficulty waking in the morning and tiredness throughout the day.

High blood sugar levels also have a negative impact on sleep and can lead to insomnia and next-day fatigue. There are various ways where one can cope with sleep issues & maintain normal blood sugar levels like exercising, having proper meals, and maintaining a proper sleep schedule.

Rama is a nutritionist and a lifestyle consultant. Having worked in the health industry for more than 20 years, her expertise in health and well-being brings a fresh and healthy approach to everyday habits- food and lifestyle. She walks the talk and delivers excellent quality nutrition, and helps develop habits that peak health & Well- being. Rama Holds a Batchelor’s degree in Biology; Extended/Specialized degree in Nutrition & Dietetics (Pennsylvania State Univ. USA).

Put The Phone Away, The Light Is Killing Your Sleep!

Did You Know There's A Close Link Between Sleep Deprivation And Obesity?