Worm Infections In Toddlers and How To Deal With Them

Why Childhood Immunizations Are Important

The Importance Of Sleep For Newborn

Sleep and Immunity: How Sleep Affects Our Immune Response

Adequate sleep is vital for good health; unfortunately, not many people relate to this feeling. Amidst growing workload and late-night culture, the importance of proper sleep is often overlooked.

Over the past few decades, sleep science has developed immensely, revealing the far-reaching importance of sleep for virtually every system of the body. As research has delved further into the link between sleep and physical health, it has become increasingly clear that sleep and the immune system are closely connected.

The immune system is critical to overall health. It is fundamental to healing wounds, warding off infections, and protecting against chronic and life-threatening illnesses. Sleep and the immune system have a bidirectional relationship immune response, like that caused by a viral infection, and can affect sleep. At the same time, consistent sleep strengthens the immune system, allowing for balanced and effective immune function.

Lack of sleep, on the other hand, can throw off the immune system. Evidence indicates that in both short-term and long-term, sleep deprivation can make you sick.

How does the immune system work

The immune system is a complex network throughout the body that provides multiple lines of defence against illnesses. These defences are generally divided into two main categories: innate immunity and adaptive immunity. Innate immunity is a broad type of protection with several layers of defence. Adaptive immunity, also known as acquired immunity, includes defences that you develop over time and ones that are targeted at specific threats.

Numerous components contribute to the complexity of the immune system. An important component of our immune system are leukocytes or white blood cells. The leukocyte's job is to identify, attack, and remove foreign pathogens from our bodies. Our immune system reacts to pathogens in an immediate (innate) and learned (adaptive) way, which allows us to safely interact with our environment every day.

When a white blood cell detects a foreign pathogen, it releases cytokines to tell other white blood cells to prepare to attack. Cytokines are proteins that act as messengers for the immune system. Other chemicals, such as histamine, are also involved in immune reactions like swelling or redness owing to an inflammatory immune response.

It's important for the immune system to be strong enough to find and attack potential threats, but it must also be well-regulated so that the body is not always on alert or in attack mode. 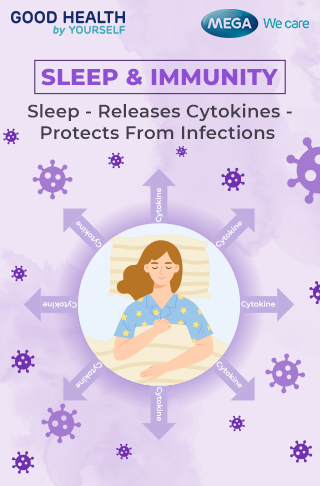 The sleeping and feeding habits of all the animals, including humans, are governed by the circadian rhythm. The word circadian is taken from the Latin word "circa," which means day and "diem" means around. Circadian rhythm is a natural process that controls the sleep-wake cycle. The sleep-wake cycle is determined by complex interactions between the central nervous system, endocrine system, and the immune system.

Studies have found that this inflammation occurs even when a person isn't actively hurt or sick. Analysis of the type of cells and cytokines involved in this night-time immune activity indicates that its role is to strengthen adaptive immunity.

Decoding the relationship between sleep & immunity

While researchers continue to study the relationships between sleep and the immune system, these effects demonstrate how closely interlinked they are and how the immune system can harness sleep to improve its ability to fight off infection.

Recent studies show links between activity and sleep patterns in opposition to the natural body clock (including night-shift work) and raised levels of inflammation in the body.

Delayed sleep patterns (sometimes caused by shift-work) can disrupt the normal body clock. When frequently people stay up late (for work or pleasure) and sleep through the day, this disruption to the body clock leads to chronic inflammation in the body.

Our body clock regulates when the levels of certain molecules of the immune system rise and fall. In a normal healthy state, when we sleep at night, our bodies actually have higher levels of inflammation than during the day.

This is because, during our sleep, when our body is busy repairing muscles and carrying out housekeeping tasks to remove toxins and waste, levels of immune molecules naturally rise during the night in order to carry out their roles in these tasks.

Experts aren't certain why this process takes place during sleep, but it is believed that several factors may be involved:

While this immune system activity during sleep is beneficial, a critical aspect of this process is that it is self-regulating. As the sleep period winds down, the body's circadian rhythm ramps down this inflammation. In this manner, getting enough high-quality sleep facilitates the delicate balance of immune function that is vital for both innate and adaptive immunity.

Sleep deprivation may be categorized as acute or chronic.

Sleep deprivation can affect various aspects of health, including: 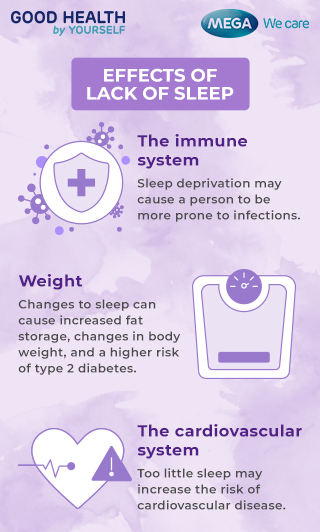 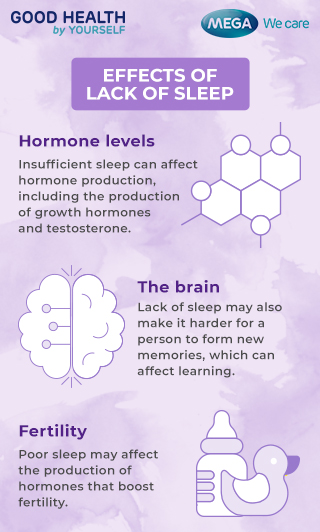 Vaccines work by introducing a weakened or deactivated antigen to the body, triggering an immune response. In this way, immunizations effectively teach the immune system to recognize and attack that antigen.

Sleep is an important factor that helps determine the effectiveness of vaccines. Studies of vaccines for hepatitis and swine flu (H1N1) have found that when people don't sleep the night after receiving a vaccine, the body's immune response is weaker. In some cases, this reduces the vaccine's protection and may even require a second dose of the vaccine.

While those studies involved total sleep deprivation after vaccination, other studies have found reduced vaccine effectiveness in adults who habitually fail to get at least seven hours of sleep. People with lack of sleep may not give their bodies enough time to develop immunological memory, potentially leaving them unprotected despite having been vaccinated.

Allergies occur when the immune system overreacts to something that does not cause harm to most people, and growing evidence connects sleep and allergies.

Lack of sleep has been tied to allergies as well. One study found that sleep deprivation made people with peanut allergies more susceptible to having an allergy attack, lowering the threshold of peanut exposure required to trigger an allergy attack by 45%.

Human cohort studies found that non-apnea sleep disorders, including insomnia, were associated with a higher risk of developing autoimmune diseases such as rheumatoid arthritis, ankylosing spondylitis, systemic lupus erythematosus, and systemic sclerosis. Several mechanisms have been postulated to explain the link between sleep deprivation and autoimmune diseases.

Sleep deprivation can accelerate disease development through mechanisms including sleep deprivation-induced increased production of several pro-inflammatory cytokines, as better discussed below. Indeed, cytokines are synergistically involved in the pathogenesis of autoimmunity, such as IL-6, whose abnormal production results in polyclonal B-cell activation and the occurrence of autoimmune features.

During the night, as repairs and maintenance are complete, the body clock signals for inflammation levels to decrease and the body gets ready to start another day.

What's happening in someone who stays up very late or works a night-shift is that their body clock naturally wants to carry out these tasks during the night, when the person is awake.

So, the body clock sends signals to increase inflammation while the person is working, socialising or bingeing Netflix — signals that work best when the person is asleep.

When the person goes to sleep at a time that doesn't align with their natural body rhythm, this further confuses the body clock, because sleep is the time for repair.

Inflammatory molecules that were already raised during the night stay high in the body while the person is sleeping.

The net result of frequently poor sleep and immunity is constantly raised levels of inflammation compared to people who sleep at times that align with their natural body clock.

Both very short and awfully long sleep durations have been found to be associated with adverse health outcomes and all-cause mortality with a U-shaped relationship. Although the relation of long sleep duration with adverse health outcomes may be confounded by poor health conditions occurring in older adults. The causal association of sleep and immunity with negative health effects is substantiated by experimental evidence providing biological plausibility.

Lack of sleep profoundly affects endocrine, metabolic, and immune pathways, whose dysfunctions play a determinant role in the development and progression of chronic diseases. Specifically, in many chronic diseases, a deregulated/exacerbated immune response shifts from repair/regulation towards unresolved inflammatory responses.

Regular sleep is crucial for maintaining immune function integrity and favouring a homeostatic immune defence to microbial or inflammatory insults.

She graduated from Lviv National Medical University. She has a specialization in psychiatry and psychotherapy. She have published scientific articles: “Anemia of Pregnant Women”; “Urinary Tract Infections”.

Mild Exercise And Sleep: Why When You Exercise Matters!

7 DIY Drinks That Can Help You Sleep Better