Sleep And Weight Loss: Can Sleep Help You Lose Weight?

Over the past several decades, the amount of time that Americans spend sleeping has steadily decreased, as has the self-reported quality of that sleep. For much of the same time period, the average body mass index (BMI) of Americans increased, reflecting a trend toward higher body weights and elevated rates of obesity.

In response to these trends, many researchers began to hypothesize about potential connections between weight and sleep. Numerous studies have suggested that restricted sleep and poor sleep quality may lead to metabolic disorders, weight gain, and an increased risk of obesity and other chronic health conditions.

There remains much to be discovered about the intricate details of how sleep and weight are connected. Several hypotheses offer paths for additional research with the hope that increasing our understanding of the relationship between weight and sleep will lead to reduced obesity and better weight-loss methods.

Can Lack of Sleep Increase Appetite? 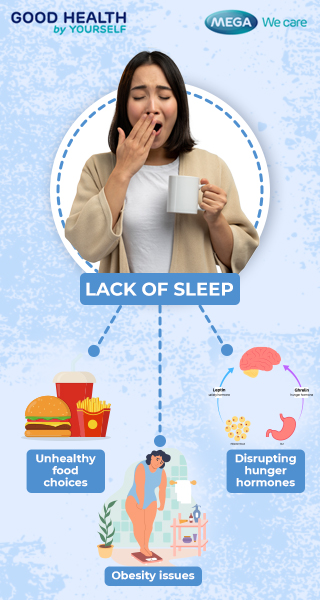 One common hypothesis about the connection between weight and sleep involves how sleep affects appetite. While you often think of appetite as simply a matter of stomach grumbling, it's actually controlled by neurotransmitters, which are chemical messengers that allow neurons (nerve cells) to communicate with one another.

In addition, several studies have also indicated that sleep deprivation affects food preferences. Sleep-deprived individuals tend to choose foods that are high in calories and carbohydrates. Other hypotheses regarding the connection between sleep and increased appetite involve the body's endocannabinoid system and orexin, a neurotransmitter targeted by some sleep aids.

Many researchers believe that the connection between sleep and dysregulation of neurotransmitters is complicated and additional studies are needed to further understand the neurobiological relationship.

Metabolism is a chemical process in which the body converts what you eat and drink into energy needed to survive. All of your collective activities, from breathing to exercising and everything in between, is part of metabolism. While activities like exercise can temporarily increase metabolism, sleep cannot. Metabolism actually slows about 15% during sleep, reaching its lowest level in the morning.

In fact, many studies have shown that sleep deprivation (whether due to self-induction, insomnia, untreated sleep apnea, or other sleep disorders) commonly leads to metabolic dysregulation. Poor sleep is associated with increased oxidative stress, glucose (blood sugar) intolerance (a precursor to diabetes), and insulin resistance. Extra time spent awake may increase the opportunities to eat, and sleeping less may disrupt circadian rhythms, leading to weight gain.

In children and adolescents, the link between sleep and weight loss is well-established, although the reason for this link is still being debated.

Insufficient sleep in children can lead to metabolic irregularities as discussed earlier, skipping breakfast in the mornings, and increased intake of sweet, salty, fatty, and starchy foods.

In adults, the research is less clear. While a large analysis of past studies suggests that people getting less than 6 hours of sleep at night are more likely to be diagnosed as obese, it's challenging for these studies to determine cause and effect.

Obesity itself can increase the risk of developing conditions that interfere with sleep, like sleep apnea and depression. It's not clear if getting less sleep is the cause of obesity in these studies, if obesity is causing the participants to get less sleep, or perhaps a mix of both. Even though more studies are needed to understand this connection, experts encourage improving sleep quality when treating obesity in adults.

How is Sleep Related to Physical Activity

Lack of sleep can result in having less energy for exercise and physical activity. Feeling tired can also make sports and exercising less safe, especially activities like weightlifting and or those requiring balance. While researchers are still working to understand this connection. It is well known that exercise is essential to maintaining sleep and weight loss.

There is an important relationship between sleep and nutrition. A major part of that relationship is the link between sleep and overeating. Sleep deprivation can affect appetite and food choices, increasing the likelihood of both overeating and consuming unhealthy foods. Overeating can affect sleep as well. Eating too much, especially when it involves heavy or spicy foods, can worsen sleep by interfering with digestion and raising the risk of heartburn. For this reason, most experts advise against eating too much and too close to bedtime.

Recognizing the bidirectional relationship between sleep and overeating can be a first step toward optimizing your diet and your sleep. Research studies have found that insufficient sleep increases overeating and unhealthy food choices. Not surprisingly, studies have also linked insufficient sleep to weight gain and a higher risk of obesity. Disruptions to normal hormone production are a driving factor behind sleep deprivation leading to overeating. Sleep plays a vital role in regulating hormone levels, including the hormones leptin and ghrelin, which are integral to hunger and appetite.

Ghrelin is closely related to hunger while leptin is tied to feeling full. A lack of sleep has been found to trigger increased levels of ghrelin and decreased levels of leptin, leading to increased hunger and appetite. This makes overeating more likely, especially since more time awake creates increased opportunities to eat.

Insufficient sleep also affects parts of the brain that determine how we think about food. In studies of people with limited sleep, brain activity is enhanced in areas that are involved in viewing food as a positive reward, making us more vulnerable to eating too much.

Even worse, these changes in the brain seem to be strongest with foods that can more easily contribute to obesity. One study found increased appetite for high-calorie foods in people who didn't get enough sleep. Similar results have been found in young children7 and adolescents8, indicating that poor sleep may be a factor contributing to rising rates of childhood obesity.

Patterns of overeating can lead to weight gain, which raises the risk of obstructive sleep apnea, a breathing disorder that causes persistent sleep interruptions. Overeating, especially at night, can disrupt sleep. As a result, a vicious cycle can emerge in which poor sleep triggers overeating that can play a role in further worsening sleep.

Can Sleeping in the Afternoon Increase Weight 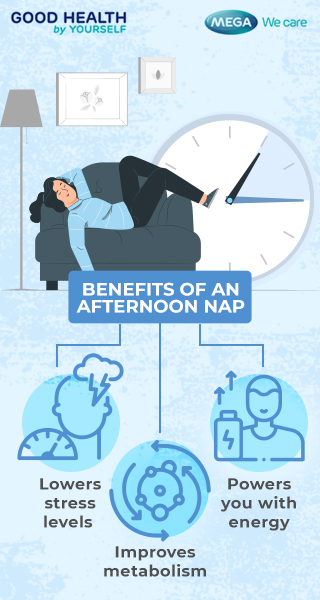 If you work from home or happen to be a home maker, you might usually have a habit of taking an afternoon nap. It actually benefits the body by improving the metabolism, lowers the stress and is good for mental health.

In people leading a sedentary lifestyle, the resting metabolic rate expends around 60-75 % of the energy. Even when the person sleeps there is an expenditure of energy that acts as a fuel for a body to function. The energy burned varies from person to person and so does the process of weight loss. Losing weight is a slow process and takes a long period of time.

Sleeping in the afternoon might cause weight gain but if the energy consumed and burned is well balanced, then it might not be a responsible factor for weight gain. The work environment and the food culture leaves many of us to consume more calories and burn less. As a result, there is increase in obese and over-weight people in the population.

Afternoon nap should always be preferred between 1 to 3 pm and one must avoid sleeping later than this time. Sleeping in the afternoon benefits the overall health, makes you more productive and is beneficial for weight loss journey.

It is believed that it leads to weight gain but let us clear the doubt with the fact that hitting the bed soon after intake of meal causes weight gain. This is not just restricted to afternoon sleep but also the night sleep. So, to avoid weight gain it is important to maintain a gap of 1-2 hours after a meal and before going to bed.

Sleeping just after a meal causes acidity and disturbs the process of digestion thus leading to weight gain. To prevent yourself from all these risks it is always recommended to take an afternoon nap but not just after having your meal.

The choice of food you make before taking a nap also impacts the body weight. A diet rich in salads will have a different impact than having potato chips before you head to bed. Thus, we see that weight gain, sleep pattern and diet are interlinked. 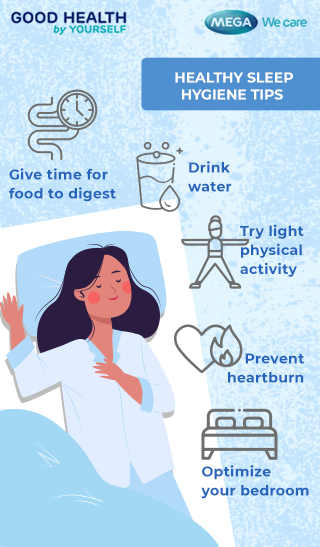 Establishing healthy sleep habits can help improve your ability to fall asleep and stay asleep through the night. Here are some sleep hygiene tips to get you started:

Overeating can interfere with normal sleep. After a big meal, the body has to devote energy to the digestive process, which typically takes several hours. But digestion usually slows during sleep, putting your body's normal sleep process at odds with the stomach's needs for digestion. This may explain why studies have found increased sleep disruptions after eating close to bedtime.

Research has found an association between eating higher quantities of calories and fat and a decreased amount of sleep. The effects of overeating on sleep may be exacerbated by excess intake of certain types of foods. For example, meals with low fiber and high amounts of sugar and saturated fat have been correlated with interrupted sleep.

Overeating can cause discomfort, which can be a barrier to sleep. Besides making you feel too full, big meals may induce and exacerbate acid reflux, in which the resultant heartburn can make it harder to get quality sleep. Heartburn may be even more likely if overeating involves certain foods such as spicy foods, fatty foods and chocolate, which can cause indigestion. Large meals with certain foods can also disrupt sleep by increasing body temperature which runs counter to the body's typical process of cooling down during sleep.

How to sleep well after overeating

If you've eaten too much but still want to get good sleep, a few tips may help:

Give it time: If you can, wait 3-4 hours before going to bed so that your body has time to devote to digestion.

Drink water: Feeling stuffed may cause you to avoid drinking water, but it's important to stay hydrated, but avoid carbonated beverages due to the gas content.

Try light physical activity: You don't want to overdo it, but a short walk at a slow or moderate pace or light stretching may help you feel more comfortable as you digest.

Prevent heartburn: Two strategies for preventing acid reflux include elevating the head of your bed by six inches16 and lying on your left side. If you're worried about heartburn, these steps may help you sleep without interruption.

Optimize your bedroom: Eliminating potential sleep disruptions, such as from excess light or noise, may help you doze off and quickly get back to sleep if you wake up during the night after overeating.

Remember that health is a lifelong journey that includes not only healthy habits but also having a healthy relationship with your body.

A Doctor of Medicine (MD) in Pharmacology., currently based in Mumbai, India, Dr Pramod Mane, comes with an experience of more than 20 years of working in Medical Affairs in the Pharmaceuticals & Nutraceutical Industry. Director of Medical Services at Mega Lifesciences since 2008, Dr Mane has been associated with several MNCS in the areas of Medical Affairs, Medical Services, Medico-marketing, Pharmacovigilance & Clinical trials in his illustrious career.